I've long desired to celebrate the movement of Love , Peace and Justice at our nations altar, the Lincoln Memorial. In many ways it is the spiritual center of a nation lost in the wilderness. I want to hold a dsy'long festival there to celebrate the 60-year anniversary of the March on Washington in August 2023. I believe we can build a movement of healers set to lead us into a new era for our nation. One where we are humble and ready to embrace our shortcomings and make amends for the mistakes of our forefathers that we still live in the benefit of. Let this nation arise to awaken it's conscience beyond any argument we could form. 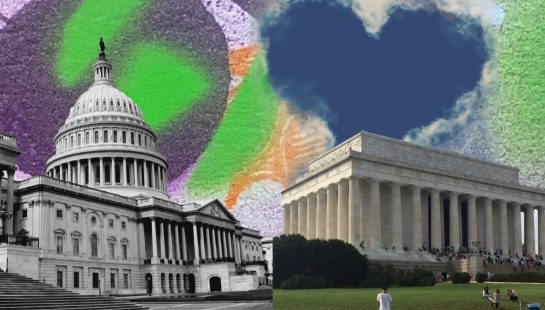 Early one morning on October 9th, 2015 my oldest son Andre and I boarded a plane bound for Washington D.C. The purpose: to witness the 20 year anniversary celebration for the Million Man March. In 1995 the Nation of Islam called black men to gather in part to demand justice and better treatment as citizens of this sprawling nation. Although people have disputed the authenticity of the numbers, there is one thing for sure. The event left an impression upon the black community spawning tributes and movies alike.

Fast forward to January 6th 2021, this is the day when the electoral votes are confirmed by the Senate. This is the final procedural step before Joe Biden is schedule to take office after January 20th. Trump supporters showed up in the thousands swarming the streets of D.C causing chaos and bursting though the doors of the Capitol to desecrate the epicenter of the legislative branch. Windows were smashed, offices broken into and property defaced.

As I sat and watched this hastily executed insurrection by makeshift terrorists, I was reminded about the trip I took with my son. We stayed way too far out of town near the BWI airport and had to take a bus and a train to get to D.C. Upon our arrival on the day of the march October 10th 2015. I was greeted by various employees of law enforcement agencies. As we marched for a mile there was a police officer of some kind every 3 feet!! So imagine the shock of seeing people storm into a capitol building after they had been warned of this rally point. Much has been already posted about the different responses according to the skin color of the participants. I will not labor the point but remember there were more cops than I had seen in my life. We stood there on the East side of the Capitol building and heard from many speakers who yelled into the microphone and made demands for justice over and over gain. Inspirational it was not to me but filled me with an anger that incensed me for its very presence.

While the March and rally were still happening we left and decided to walk to the Lincoln Memorial. In pictures they seem to be close but there are over 2 miles apart. As we began the journey my 8 year-old soon languished in pace and I could tell he was not going to make it. So we hailed a pedi-bike outside of a museum and got a slightly breezy ride on a hot October day in the nation’s capitol. What greeted us as we arrived was a very different atmosphere. There was a peace and calm that felt more like a church than a national monument. There were hundreds of people there yet there was a quiet that defied the odds. It was obvious we stood on holy ground among the tourists and children sliding down the marble bannisters.

While the spirit of the Capitol was very confrontational the spirit of the Lincoln Memorial was conciliatory. While the atmosphere of the Capitol felt hazardous the other was healing. I guess those “better angels of our nature” reside there with the statue of our 16th president carved out of marble and the reflecting pool just outside the pillars. Of course this is where the “I have a Dream” speech occurred. It appealed to the unity and common destiny that the Capitol is woefully unable to envision. It is where there has always been and always will be the harsh realities of partisanship and fights that follow disagreement. This administration has thrived upon the chaos that accompanies the spirit of the Capitol. Now let the inspirational adherence to our ideals as a people and nation overtake our ability to disagree and demonize. In two miles Andre and I had travelled from the past and present into a promised future we were blessed to get a glimpse of on one sunny August day in 1963. May this nation yet find the way as well.

We must not be enemies. Though passion may have strained, it must not break our bonds of affection. The mystic chords of memory will swell when again touched, as surely they will be, by the better angels of our nature.”